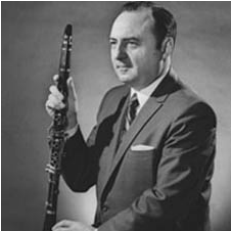 Ben Armato 1929 - 2015
After serving in the United States Army Band at West Point from 1944-1947, Ben Armato attended the Juilliard School of Music, studying clarinet with Daniel Bonade. In 1953, he was hired by the Metropolitan Opera Orchestra. His contracted title was "General Clarinet", a unique position requiring him to be responsible for playing Solo, Second, E-flat and Bass clarinets.

When Ben was hired, he was the youngest member of the orchestra and was called "the kid". Ben played with the Met for thirty-five years, a time he considers himself "showered in beauty." Ben played in the Met during the "Golden Age of Singers" and fondly remembers performing with such luminaries as Maria Callas, Renata Tebaldi, Joan Sutherland, Jussi Bjoerling, Robert Merrill, and he particularly enjoyed the famous competition between Brigit Nilsson and Franco Corelli. He attributes the apex of his musical development to playing under the batons of conductors such as George Szell, Sir George Solti, Leopold Stokowski, Bruno Walter, Eric Leinsdorf, Herbert von Karajan and Leonard Bernstein.

In 1969, Ben invented and patented a precision reed measuring device, the PerfectaReed. In 1972, he published "The Opera Clarinetist", an opera excerpt book based on Ben's Metropolitan Opera parts, featuring all of the most important solos and passages from the history of the opera repertoire. In 1980, he wrote "Perfect A Reed", a scientific method for adjusting single reeds. This book is no longer in print and has been vastly expanded to Ben's most recent publication, "Perfect A Reed... and Beyond", published in 1995. In 1993, Ben invented and patented The Reed Wizard, an ingenious profiling device that quickly and easily redesigns and balances commercially manufactured reeds.

In addition to a storied career as a performer and achieving success as an inventor and author, Ben's true passion is for teaching. He has maintained a private teaching studio for most of this life and taught on the faculty of SUNY Purchase from 1981-1991. He has been seen at most clarinet conventions taking students aside and giving them gratis private lessons. Many of them have no idea that they have received guidance from such an important teacher!

Ben has shared the majority of his life with Ruth Negri, a classmate at Juilliard. Ruth is a harpist and spent her professional career performing with the New York Philharmonic Orchestra. On February 24, 2015, Ben Armato passed away peacefully. He is survived by, Ruth, his wife of 64 years, his children and great grandchildren.